Time flies quickly : what has EuroISME reached after 10 years, where shall EuroISME go in the next 10 years? 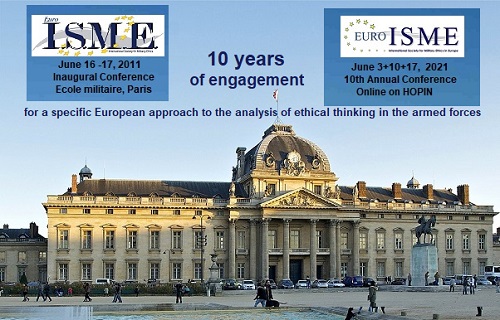 On June 16 and 17, 2011, the members and friends of the International Society for Military Ethics (ISME) met for the first time in Europe, after all previous meetings since 2005 had taken place in the USA. With the Ecole Militaire in the middle of Paris, one of the most prestigious conference venues ever had been elected for the event.

In view of the progressive integration of troops from former Warsaw Pact states into multinational European armed forces structures and of regular deployments within the framework of EU peace missions, the European experts faced the urgent demand for an independent EuroISME association in order to better adapt their work to the specific European approach for analysis and further development of the military ethical fundamentals.

After clarifying the legal and financial framework, the founding decision was taken during this Paris conference.

The annual conferences, which are held in cooperation with renowned institutions and at attractive conference venues, are attended by high-ranking experts from all over the world. They are "beacon events" which are usefully supplemented by numerous initiatives and other thematically focused meetings.

Unfortunately we could not hold the 10th Annual Meeting 2020 in Berlin as originally planned and celebrate there the anniversary duely with EuroISMEs usual formal dinner! The COVID pandemic first forced us to postpone and then to conduct the conference 100% virtual ...

However, the pandemic was (and is) also a clear warning about rapidly changing conditions and new challenges in the implementation of security and peace - not only for our continent! The pertinent issue of values ​​and virtues, of principles and norms of behavior for the creation of a common culture of responsibility and ethical thinking is particularly acute today!

The European armed forces, but also "security forces" in a wider sense, are confronted with new types of operations and methods of deployment. The drifting apart of traditional forms and structures of society leads to diverse conflicts in Europe and on its periphery, which cannot be overcome with the original (Clausewitzian) concept of "war as the continuation of politics by other means". The “Just Peace” is becoming more and more difficult to establish, the “Just War” is no longer an adequate ethical compass on the way to there.

This question should not wait to be tackled till the next annual conference in Budapest in 2022: within EuroISME there has been and is - from the very beginning - competition between the various approaches for a common European leadership culture in the armed forces ! These tensions must be endured and worked up! For this, too, EuroISME was founded 10 years ago as an independent association ... and will work even more energetically for its goals over the next 10 years!

Discuss it with us in the forum:

Prof. Dr. Thomas R. Elssner replied the topic: #3 4 months 5 days ago
On the occasion of our "Online Conference 2021" and as a Vice President of EuroISME, I would have liked to say something about this question !
You can see my preregistered video here, which was unfortunately not taken by the "Program Committee" ...
Here you can also download the text as a PdF file.
Mind you: it is absolutely not about German or French as the working languages at our conferences, but about the analysis of fundamentals and concepts in all relevant scientific languages for a "common European approach" in military ethics!
I am looking forward to read your comments !

Having been a “compagnon de route” of EuroISME for the past 10 years, I cannot agree more dear Thomas!
Shall EuroISME be a forum for military ethics firmly grounded in “European values” or, pragmatically, shall we accept the fate of becoming a gentle hub open to free flow of all kind of interests and strategies?
I believe one way to address this question is by answering another one: do we have as our main goal to help European armed forces to reflect in a critical way on the ethical challenges the military is, and will be, facing?
Reading this written comment you lose the pleasure of hearing my Inspector Cluzo accent, but let me end with a question I asked myself while attending the 2011 first conference of EuroISME in Paris: do I formulate ethical questions the same way when I am not thinking in my mother tongue?
Today, EU’s Common Security and Defence Policy raises ethical issues less and less addressed by the 26 members of the European Defence Agency in their own Muttersprache/madrelingua/mateřský jazyk/anyanyelv/etc. Shall this be a concern?

All EuroISME members will agree with me in saying that if science is international, ethics is not? Is Europe braindead to the extent that we cannot anymore find in our own history, culture, humanist and democratic values enough material to feed a specific approach of military ethics worth to be promoted?