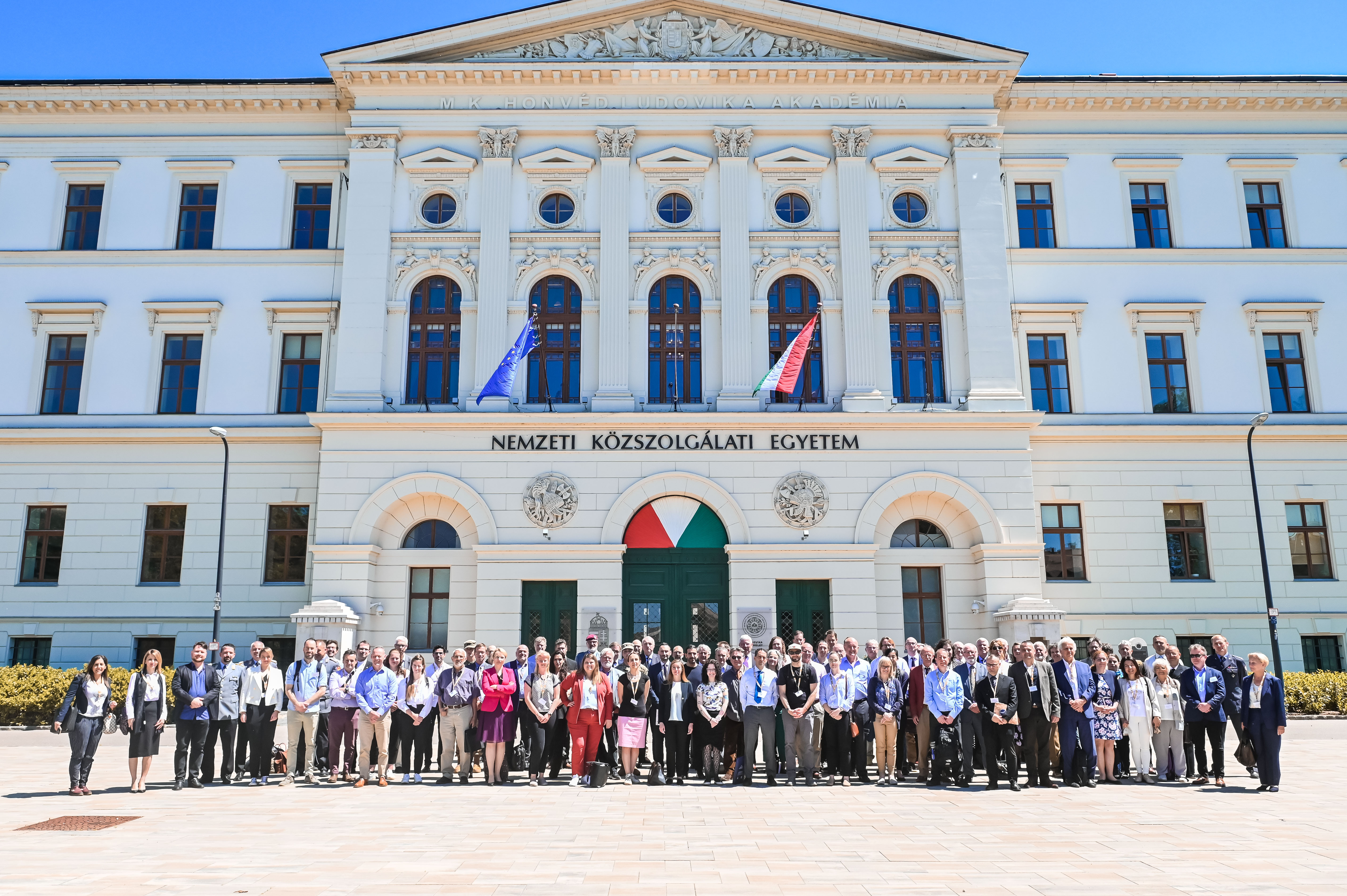 Group Photo in front of the Ludovika University

Conference Theme : Is military ethics keeping pace with the changing character of warfare?

This year, the EuroISME annual conference took place for the first time in Hungary. The venue was the Ludovika University of Public Service. The historical institution of the Ludovika was founded in 1808 by Maria Ludovika, queen of Hungary as the wife of king Habsburg Francis I. The institution, however, opened its gates in only 1872 for the education of the Hungarian personnel of the Habsburg army, after the Hungarian Period of Reform (1825-1848), the Hungarian Revolution and War of Independence (1848-49), and the Compromise with the Habsburg dynasty (1867). Nowadays Ludovika University of Public Service is the basic institution of the Hungarian military higher education, and also of the other branches of public service, like police. Ludovika regularly hosts conferences and other events in every year, the EuroISME annual conference was one of these in 2022.

The subject of the annual conference was: ‘Is military ethics keeping pace with the changing character of warfare?’. At first sight this question seemed a survival-related question of the society of the military ethicists, but as the conference was proceeding the participants came up with several actual and interesting military ethical problems and questions. So, finally the original question turned out to be a sort of provocation.

The conference took place between 19-20th of May, and it had more than one hundred registered participants from all over the world. So, participants came not only from Hungary and nearly all European countries, but also from Great Britain, Russia, United States, Canada, Australia, Chile, and even Taiwan.

In his opening address, Air Commodore (retd.) John Thomas, president of EuroISME, emphasised: the subject of the conference became particularly relevant because of the Ukraine-Russian war, in which the moral and legal norms are seemingly disregarded. You can read/download the president's entire opening address here.

Gergely Deli, rector of the Ludovika University of Public Service, said: military ethics has its important place in the education system of Ludovika University. The rector underlined: military ethics has great value because it constitutes a moral minimum without which wars would be bloodier, and because it strengthens the cohesion inside the national armies, among the different national armies, and among soldiers and civilians.

Colonel Klára Siposné Kecskeméthy, vice dean of the Ludovika University’s Faculty of Military Science and Officer Training, was talking about the history of Ludovika University, and she emphasised the adjective form of the phrase ‘Ludovika’ was a symbol for the Hungarian society in the past which expressed moral values and was represented by the Hungarian army officers. Nowadays the purpose of the institution is to carry on this heritage.

The opening speeches were followed by plenary and panel presentations which aimed at several topics. One of the topics was to examine the nature of war and the new forms of war, like proxy war and hybrid war. Some presenters (Jovan Babic, Tony Pfaff, Mihaly Boda) attempted to answer to the question: whether just war theory can be extended or interpreted to these new forms of war.

Another topic of the conference was the new methods and weapons of war, like autonomous weapon-systems or enhanced soldiers (Henrik Syse, David Whetham, Michael Gross). Besides the new forms of war and new weapons the proportional measure of harm caused in war earned wide attention in general (Michael Skerker). Regarding this question some presenters held that counting the proportionality one should include harms for human beings (civilians, non-combatants) and harms for the natural environment as well (Dragan Stanar). Finally, some presenters concentrated on building and training an army and the connected moral questions. The traditional warrior ethos, and more modern woman-man equality and gender theory came into question (Andrea Ellner) as much as the general significance of the education and training of the army personnel (George R. Lucas, Jr.).

The conference also gave place for the annual General Assembly of EuroISME, during which members of EuroISME approved the annual reports of the executing directors and of the treasurer and they (re-)elected the members of the Board of Directors for the next tenure of office.

The AGM minutes can be downloded here.

The official Annual Dinner Banquet was the most suitable moment for the President of the jury, Reverend Dr. Philipp MacCormack, to hand out the trophy to the winners of Euro-ISME’s Prizes 2021 and 2022 for the best student theses written on military ethics. The prizes have been awarded to Surgeon Captain Richard Heames (KCL) and his thesis "What should informed consent in the military look like in relation to pharmacological enhancements?" (1st Prize/2021) and Army Major Kevin van Loon (NL) and his contribution on "Military ethics education for Royal Netherlands Army (candidate) officers: a continuous curriculum?" (2nd Prize / 2021).

The prizes for 2022 went to : Lt.Col. Matthew R.C. Fyjis-Walker (UK) for his thesis on "Explore the use, and implications, of sanitized language by the public authorities in explaining violence to the electorate in the UK" (1st prize) and Pilot officer-cadet Adrien Aury (Belgium) whos thesis examined "The application of Just War Theory to peace operations."

You can read more details about the winners and their excellent theses on our specific EuroISME-Thesis-Prize page.

Impressions from the conference

We thank the Ludovika University in Budapest for its kind hospitality by hosting EuroISME’s 2022 conference.