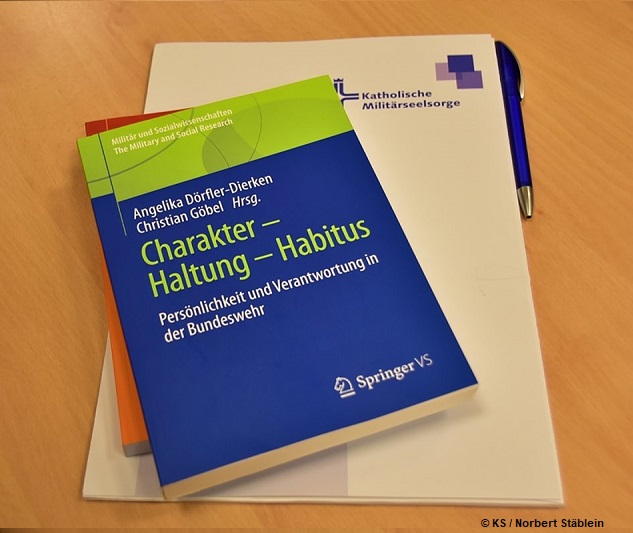 On Thursday, November 3, 2022, the book "Character - Attitude - Habitus" was presented at the Catholic Military Bishops' Office (KMBA) in Berlin as part of a reception organized jointly with EuroISME. This is the title of the anthology published in the “Military and Social Sciences” series, which is highly valued by scholars. The editors are the scientists Angelika Dörfler-Dierken and Christian Göbel, who are also well known to the EuroISME members. They and all the numerous co-authors were warmly welcomed by the host at the KMBA, Military Vicar General Monsignor Reinhold Bartmann: “You voluntarily went to a Catholic house and that on a day on which the blessed Father Rupert Mayer is honored for his attitude towards National Socialism “. With this introduction he had set the impulse for the book title.

Major General Georg Klein commented on the contents of the book for the servicewomen and servicemen, specifically from the point of view of a military leader. “Questions about character, attitude and habitus are relevant right now,” he remarked with a worried look at the ongoing war of aggression against Ukraine.

EuroISME made a significant contribution to the book presentation, on whose initiative the event was made possible with the joint invitation of the authors to the Catholic Military Bishop's Office. EuroISME Vice President Professor Dr. Thomas R. Elssner, who is also the head of the department for fundamental questions at the KMBA, moderated the lively discussion with the guests after the book presentation.

The anthology contains articles on different approaches to the debate about new forms of ethical education in the Bundeswehr, in which the military chaplaincy, among others, is also intensively involved. In addition, the social role of soldiers is examined and personal development in the military context is addressed. “... soldiers of the Bundeswehr (is) ... granted freedom of conscience; they are not obligated to blind obedience, but to ethically examining or “conscience-guided obedience”,” state Dörfler-Dierken and Göbel in the introduction. Since the content revolves around ethical education and conscience, the premises of the Catholic military chaplaincy were not only a particularly suitable setting for this book presentation. 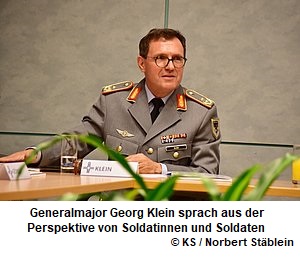 General Klein immediately picked up the keyword formation of conscience. He said in an impressive way that he had "experienced the process of change in himself". In doing so, he turned the printed word of the anthology into a personal and authentic experience for everyone present. In the anthology, further aspects are built up in a way that is easy to understand. Keywords such as "inner guidance" or "lifestyle lessons" always attract lively attention.

Dr. Dirk Ackermann, senior military dean and head of department in the Protestant Church Office, has always taken care of them: His thesis is that "ethical education in particular requires the same freedom from military hierarchy and assessment as life lessons". Last but not least, reference is already made to this in the foreword to the declaration of the German bishops from 2005, in which soldiers are addressed as “servants of peace”.

Operational engagement as a behavioral test

In a subsequent discussion among co-authors and guests, the keywords ethical education and internal leadership were taken up and discussed controversially. Thomas R. Elssner managed to moderate all the speeches and discussions in a professional manner. Among other things, the question of who should give ethical lessons was a central topic, which gave suggestions for the pros and cons of various models and, last but not least, for good arguments. Thanks to General Klein's impressive statements, the focus was on both military and pastoral points of view: "Deployment and combat are the ultimate tests of behavior for soldiers," the general pointed out. "Comrades, family and God can provide support here."

The topics of the anthology are common property and the basis for ongoing further development of ethical education in the Bundeswehr as well as in and through military chaplaincy. A continuation of this discussion is not only very desirable, but even necessary. EuroISME will not only further intensify the dialogue in Germany and across Europe by promoting corresponding events.

Angelika Dörfler-Dierken is a professor in the Department of Protestant Theology at the University of Hamburg and is currently running a German Research Foundation /(DFG) project on the history of military chaplaincy. As a professor of philosophy and theology, Christian Göbel holds the D'Alzon Endowed Chair at Assumption University in Worcester, MA, in the United States. Both editors have a connection to the Bundeswehr and the Bundeswehr Center for Military History and Social Sciences (ZMSBw) in Potsdam, where the series is published. Angelika Dörfler-Dierken headed the project area of internal leadership - ethics - military chaplaincy and Christian Göbel is a lieutenant colonel in the reserve and does his reservist service in the ZMSBw.